Members and Friends Events and News
In the series POEMS IN THE QUAKER MEETING HOUSE
@ 43 St Giles  Oxford
free admission +  a collection + refreshments
@ 6.30 for 7pm till 9pm on Sat. October 12th

Philip Gross and Lesley Saunders will read from their book A PART OF THE MAIN: A CONVERSATION (Mulfran, 2019), a dialogic poem, even an improvisation, born of the difficult feelings and public discord arising from the events of 2016. Philip is a Quaker as well as a T.S.Eliot prize winner and author of 20 collections of poems. Lesley is author of several books of poetry, most recently Nominy-Dominy  (Two Rivers Press, 2018). She is a creative collaborator with many other ‘makers’ of  different art forms. Lesley and Philip first met through a collaborative poetry venture A Game of Consequences in which 26 poets were invited to share their thoughts and feelings about living in a nuclear age. 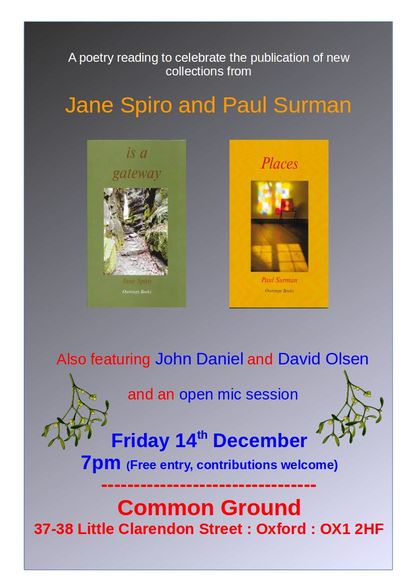 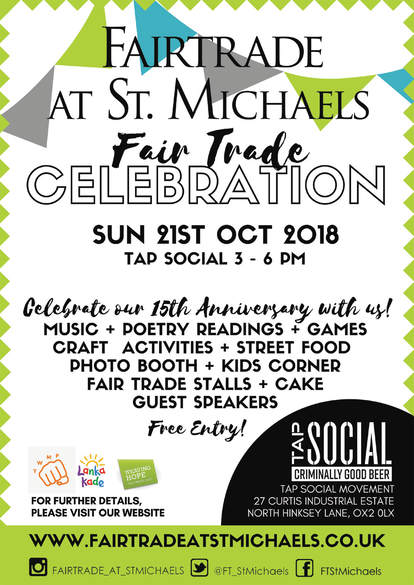 There will also be music by the Young Women's Music Project.

On 2 January 2017 Rip Bulkeley, the founder of Back Room Poets, launched the 'Poema sans Grenzen' project, which aims to create a multilingual poem without borders. A short stub text in English - just 25 syllables in five lines with a two-word title - is being translated into as many languages as possible. For each language six texts are created: one for each line plus one for the whole thing, and those six texts are then reproduced in five colour combinations, making thirty 'slides' for each language. Software is being written to do most of this before calling randomly treated files in random order to one or more projectors in a suitable space. It should also be possible to weight a particular slideshow in a particular place towards any chosen language. The role of music in the piece is under discussion. If you know any composers, preferably minimalists, who might like to collaborate on this, please get in touch.

A poem in this form has no beginning or end and no determinate length. It cannot be written down. It exists when the machines are switched on and when someone enters the projection space, and it disappears when they leave or the machines are switched off. Once we have pioneered this form, it will of course be available for anyone in the world to do the same sort of thing.

After three weeks the stub text has been translated into Albanian, Arabic, Chinese, Danish, Esperanto, Estonian, Farsi, French, German, Greek, Italian, Japanese, Russian, Scots, Spanish, Swedish, and Welsh. Translations into Afrikaans, Bangla, Dutch, Gaelic (Irish and Scottish), Hausa, Maori, and Urdu are at various stages. In several cases they are the work of distinguished poets. Other languages are also being sought for, especially from under-represented parts of the world. All the languages will be used in every performance, and all translators will be acknowledged in a leaflet distributed wherever the poem is performed.

Besides Rip, BRP members or overseas members who have already contributed to PSG include Hanne Busck-Nielsen, Chengde Chen, Inge Milfull, and Erminia Passannanti.

If you can either provide a translation or suggest someone who might do that, please get in touch with Rip by clicking here.  The translation needs to take the form of six paragraphs, the title followed by five lines, in the simplest possible language, in order to take its place alongside the others. If you have a particular font you would like to suggest for your language, please do so. If you would prefer to translate from a different language, please ask Rip to send you that version.

And the text? Although it has been well received in many places, it is not being bandied about the internet because the completed (?) poem is intended for machine performance in public spaces, rather than solitary contemplation. The original text arose from Rip's elegiac focus on the long-drawn-out and still ongoing loss of his wife to dementia. But the stub text does not claim to be a poem in its own right. The poem is what we are building together.